This game was made as part of the DADIU Education in Denmark, by a team of 19 in  7 weeks.

Run, hide, collect, and find your teddy bear in the school after dark.

Investigate the scary hallways and classrooms and be on the look-out for items that could help you retrieve your teddy bear.

But be careful and hide, if possible, because the janitor who stole your teddy lurks the halls in the darkness…

This game is good. great work team. if you up for a collab in the future, let me know. i'm a video game writer for various indie studios

Reply
CjuGames260 days ago(+1)
I Think the students have done a pretty great job with this one. It's not perfect and there's a few niggling details that could be fixed, but it's a solid concept with a pretty interesting story too. Enjoyed it!
Reply
Eshbaal275 days ago

I just took a stab at playing this - first of all, wonderful to see a game by danish devs, as a dane myself. I definitely recognized a lot of objects around the school from my own childhood, even if the whole locker thing makes it look more like american schools.

I love the idea of running around a school looking for your confiscated toy and hiding from a janitor, but as the game is now, I found it nearly impossible to really play. You ALWAYS hear the janitor's footsteps right next to you no matter where he is relative to you, and several times I saw him patrolling the same two halls over and over again regardless of where i was trying to go. It frankly made trying to advance tedious and frustrating, and this feel less like a finished product and more like a prototype.

i really did want to record this and play it, but it just became a whole lot of "trying the same thing again because i couldn't make sense of the map and had no way to gauge where the janitor even was", and it's a shame. If you ever update this game, I would love to know and give it a second stab. As it is now, I just can't find the patience.

Still, I love what you are doing here, and really want to see more.

Dear Eshbaal,
I am DADIU's educational coordinator.  Thank you so much for taking your time to play and comment on this game, which was made by Solar Studios in Aalborg. A player's  experience of the game is of great value, especially for the team who created it. Maybe you know this already, but I will just in short describe what DADIU is.

DADIU is a collaboration between 13 educational institutions in Denmark and each fall approximately 100 students come together for the first time to create games. They create two mini games and in the end they have 5-6 weeks to create their Graduation Game -  You have played one of them here.

There is never enough time to create everything they want in the game. That is a part of the learning experience. That is why some of the teams might decide to work  with the game after they have graduated from DADIU. Hence, there's a chance that this game will be updated and improved. You can follow us on Facebook or check out our website, where we would post news like this.

Thanks again for taking the time to comment and for playing the game. I will make sure to pass your feedback to the team. You can also check out our recent live stream on twitch, where the six games are being presented and we will do the same for the next semester at the end of this year.

This is a failure on my part - I did actually know this was a shcool project, but appear to have forgotten while writing the above comment, hence the "prototype" remark, which I now do feel pretty bad about. Thank you for reminding me.

I have played other games made under similar conditions, and I did not mean to disrespect the educational process or the work of the team - I apologize if it came off that way.

I don't know the details of development personally, only what I experienced as a player, and if anything any disappointment I have comes from wanting to see more of the world and story that was created, but finding it difficult to do so in the current state.

There really is a lot I like here, and I really would love to see an updated, polished version should the team choose to do so. Either way, I wish everyone the best.

Thank you for your reply. I only read your comment as very enthusiastic and I'm sure the team will read it like that as well! I sent your comment to the producer of the team and he found it very useful, so I am sure it is good feedback whether or not they choose to move on. :)

Thank you again for taking your time playing their game! The team will love you for that. Please do keep on playing DADIU's games and send your constructive feedback, if you have any.

Well made game. Chase sequences got a little repetitive after awhile though. Seemed to be a bit of a sound glitch as well (as if the janitor was constantly walking right next to me). Twist ending was fun. Overall I had fun.

Thank you so much for playing :D Your playthrough really made our day 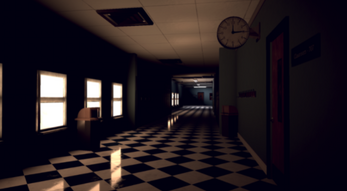 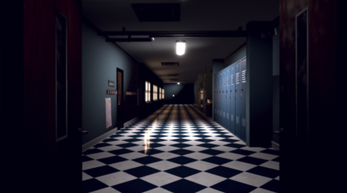 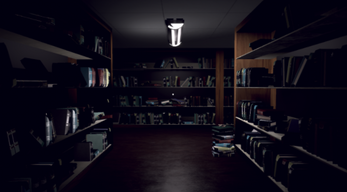 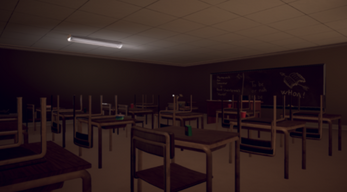